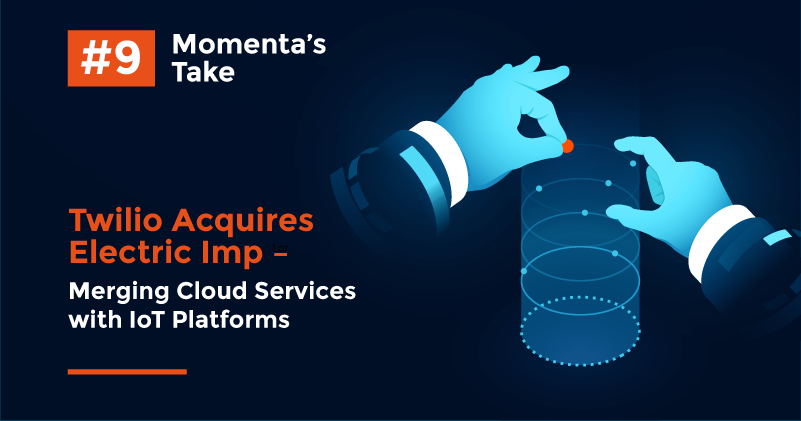 Recently, Twilio announced the acquisition of privately held Electric Imp. Electric Imp had raised over $40 million in funding and is a provider of hardware and software solutions for managing fleets of connected devices. Twilio came to prominence as a provider of communications APIs for Software as a Service apps, powering applications such as Uber and Lyft. Last year, Twilio posted over 60% revenue growth and this year the company is forecast to generate over $1.6 billion in revenues.

The combination of cloud services platform and IoT management platform is not without precedent. LogMeIn acquired Pachube in 2011, creating the foundation for the Xively platform, which was sold to Google in 2015 for $50 million. At the time, the combination of LogMeIn’s remote device management capabilities with the Xively IoT platform offered the promise of extending remote management beyond mobile phones and PCs to other connected devices such as lighting, building systems and other devices. Amazon’s acquisition of 2lemetry in 2015 sought to expand AWS services to IoT controls, and the company has organically expanded its IoT management platform significantly, acquiring the Ring smart camera and doorbell technologies while enhancing its Alexa devices for smart home.

Microsoft’s Azure IoT services provide a full suite of developer tools, backend services and a broad range of hardware partners as well. Google has had mixed success with its Nest acquisition, with leading developers departing the company, while Samsung has faced technological and market challenges following its acquisition of SmartThings. Overall, the track record of cloud companies acquiring IoT platforms has been mixed at best – opening up opportunities for additional players to enter the market.

Notably, Twilio’s CEO and Co-founder Jeff Lawson commented “..The IoT industry doesn’t seem to attract innovation at the same rate as software. One possible reason is that experimentation — real experimentation — that is, testing real business models in the wild — remains difficult. By democratizing access to cellular IoT connectivity, we’ve been able to help move things along, but many of the hardest infrastructure problems remain unsolved. With the Electric Imp acquisition, we gain the team and technology needed to make a bigger dent in the problems facing future IoT developers.”

Twilio approaches IoT from a different angle – as a cloud-based communications services API provider. The company does not sell applications directly, rather its APIs power a broad range of applications developed by its clients – these can include auto agent response, SMS to email, support chatbots, anonymous conversations (for example allowing Uber drivers to call their passengers without revealing either’s name or phone number), browser based calling, phone verification and other capabilities. The company has expanded its offerings from SaaS APIs more broadly into call center enablement and other capabilities, and with the acquisition of Electric Imp the company can go to market with combined hardware, software and services that clients can use to develop applications. It’s too early to tell whether this acquisition will fare better than some its IoT platform predecessors, but given both Twilo and Electric Imp have the benefit of more mature cloud platforms and technologies (and large and growing user bases) there’s reason to believe the combination could create a significant player in Digital Business application development.

Unlock the Power of Digital -  Momenta Partners encompasses leading Strategic Advisory, Talent, and Ventures practices for Digital Industry. Connect with us to more about our three practices.